So here's the story behind this. I have been missing hamburger and hot dog buns since going gluten free just over a year ago. I have tried out Kinnikinnick hamburger buns but they are only edible if they are freshly toasted. Recently I saw a blog that showed how they used Udi's bagels as a hamburger bun. My husband, son, and I drove over an hour north to a Whole Foods to get some bagels the next weekend. After trying a grilled hamburger in a Udi's bagel (without being toasted), I was SOLD!

So today I was talking to my husband when he came home. All of a sudden it hit me that I should try the bagel as a hot dog "bun". So this is what I did to make a simple, and delicious vessel to hold my Nathan's hot dog.

Step 1: Cut the bagel in half right down the top 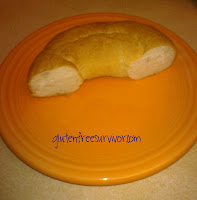 Step 2: Open up one half of the bagel along the outside, pre-cut end with the end you cut facing down on the plate (Oddly, it hold the hot dog and "bun" upright--very convenient!) 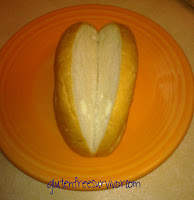 Step 3: Place hot dog inside "bun" and add GF condiments (Mine was mayo and ketchup) 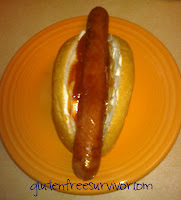 Nathan's famous hot dogs pride themselves on being bigger than the bun, which was okay for me!
Posted by Kristen Trelz at 5:43 PM