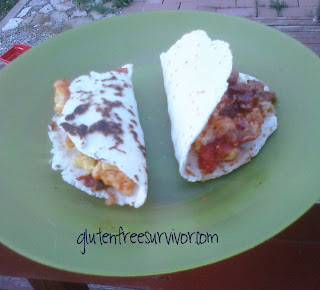 This is from my second attempt (today) with GF tortillas using Tom Sawyer's Gluten Free flour mix. This makes a thicker tortilla then the store bought tortillas. It was pretty good and will make a nice occasional change from the white corn tortillas that I have been eating since being diagnosed with Celiac Disease in May 2009.

My first attempt today was with me rolling out the dough. It was a complete mess. Everything kept tearing when I would roll it or when I would attempt to get it off of the floured surface to put into the pan to cook. I had the most misshaped tortillas I had ever seen, and those were only the ones that actually made it into the frying pan. I threw away several as well in pure frustration with tears in my eyes. Cooking should never be that way!

After talking to my husband who was at work and telling about my frustrating experience, he went to the store and surprised me with a beautiful tortilla press! I read online that you shouldn't use them to make flour tortillas, that rolling them was the only way to go. Tried that, didn't work... I was ready to try something new. The tortilla press did a nice job sandwiched between two sides of a ziploc bag. I was able to peel them off AND get them into the pan to cook. VICTORY! The photo above shows what two of my "taco sized" tortillas looked like tonight filled with ingredients for a breakfast burrito.

2C. + 1TBS Tom Sawyer GF Flour
1/2 tsp. xanthan gum
1.5 tsp. baking powder
1 tsp. salt
2 tsp. sugar (suppose to help retain more moisture)
2 tsp. vegetable oil (I only had canola, so I used that)
1 C. of warm milk
Mix all the ingredient together except the milk. Slowly add in the milk and work in by hand until mixture forms a sticky, wet dough. Roll into 8 equal sized balls and cover with plastic wrap. Cut the side seams and top off of a gallon sized ziploc bag. Place one ball of dough in between plastic on tortilla press and flatten. Place in a skillet (I used cast iron) and light brown on each side.

** My first tortilla stuck a little in the ziploc. I lightly, so lightly, dusted the sticky parts of the bag up with GF flour and didn't have any more issues with sticking. You must tenderly peel off the tortilla from the plastic or it will rip.
Posted by Kristen Trelz at 8:38 PM